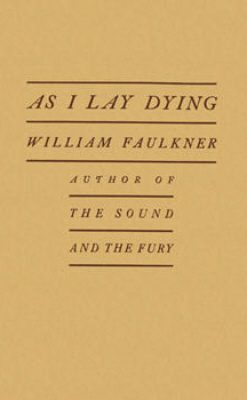 Pa stands beside the bed. From behind his leg Vardaman peers, with his round head and his eyes round and his mouth beginning to open. She looks at Pa; all her failing life appears to drain into her eyes, urgent, irremediable. “It’s Jewel she wants,” Dewey Dell says.

“Why, Addie,” pa says, “him and Darl went to make one more load. They thought there was time. That you would wait for them, and that three dollars and all …” He stoops, laying his hand on hers. For a while yet she looks at him, without reproach, without anything at all, as if her eyes alone are listening to the irrevocable cessation of his voice. Then she raises herself, who has not moved in ten days. Dewey Dell leans down, trying to press her back.

She is looking out the window, at Cash stooping steadily at the board in the failing light, labouring on toward darkness and into it as though the stroking of the saw illuminated its own motion, board and saw engendered.

“You, Cash,” she shouts, her voice harsh, strong, and unimpaired. “You, Cash!”

He looks up at the gaunt face framed by the window in the twilight. It is a composite picture of all time since he was a child. He drops the saw and lifts the board for her to see, watching the window in which the face has not moved. He drags a second plank into position and slants the two of them into their final juxtaposition, gesturing toward the ones yet on the ground, shaping with empty hand in pantomime the finished box. For a while still she looks down at him from the composite picture, neither with censure nor approbation. Then the face disappears.

She lies back and turns her head without so much as glancing at pa. She looks at Vardaman; her eyes, the life in them, rushing suddenly upon them; the two flames glare up for a steady instant. Then they go out as if someone had leaned down and blown upon them.

William Faulkner  ·  As I Lay Dying