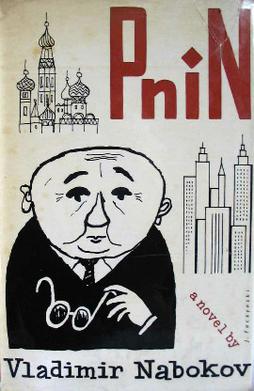 The elderly passenger sitting on the north-window side of the inexorably moving railway coach, next to an empty seat and facing two empty ones, was none other than Professor Timofey Pnin. Ideally bald, sun-tanned, and clean-shaven, he began rather impressively with that great brown dome of his, tortoise-shell glasses (masking an infantile absence of eyebrows), apish upper lip, thick neck, and strong-man torso in a tightish tweed coat, but ended, somewhat disappointingly, in a pair of spindly legs (now flannelled and crossed) and frail-looking, almost feminine feet.

His sloppy socks were of scarlet wool with lilac lozenges; his conservative black Oxfords had cost him about as much as all the rest of his clothing (flamboyant goon tie included). Prior to the 1940s, during the staid European era of his life, he had always worn long underwear, its terminals tucked into the tops of neat socks, which were clocked, soberly coloured, and held up on his cotton-clad calves by garters. In those days, to reveal a glimpse of that white underwear by pulling a trouser leg too high would have seemed to Pnin as indecent as showing himself to ladies minus collar and tie; for even when decayed Mme Roux, the concierge of the squalid apartment house in the Sixteenth Arrondissement of Paris where Pnin, after escaping from Leninized Russia and completing his college education in Prague, had spent fifteen years – happened to come up for the rent while he was without his faux col, prim Pnin would cover his front stud with a chaste hand. All this underwent a change in the heady atmosphere of the New World. Nowadays, at fifty-two, he was crazy about sunbathing, wore sport shirts and slacks, and when crossing his legs would carefully, deliberately, brazenly display a tremendous stretch of bare skin. Thus he might have appeared to a fellow passenger; but except for a soldier asleep at one end and two women absorbed in a baby at the other, Pnin had the coach to himself.