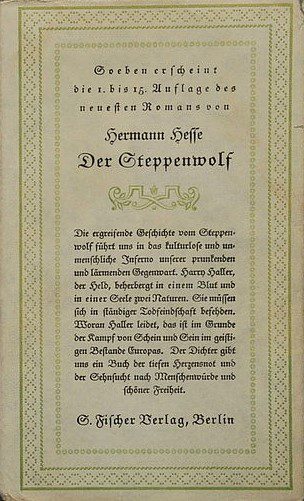 An experience fell to my lot this night of the Ball that I had never known in all my fifty years, though it is known to every flapper and student – the intoxication of a general festivity, the mysterious merging of the personality in the mass, the mystic union of joy. I had often heard it spoken of. It was known, I knew, to every servant girl. I had often observed the sparkle in the eye of those who told me of it and I had always treated it with a half-superior, half-envious smile. A hundred times in my life I had seen examples of those whom rapture had intoxicated and released from the self, of that smile, that half-crazed absorption, of those whose heads have been turned by a common enthusiasm. I had seen it in drunken recruits and sailors, and also in great artists in the enthusiasm, perhaps, of a musical festival; and not less in young soldiers going to war. Even in recent days I had marvelled at and loved and mocked and envied this gleam and smile in my friend, Pablo, when he hung over his saxophone in the blissful intoxication of playing in the orchestra, or when, enraptured and ecstatic, he looked over to the conductor, the drum, or the man with the banjo. It had sometimes occurred to me that such a smile, such a childlike radiance could be possible only to quite young persons or among those peoples whose customs permitted no marked differences between one individual and another. But today, on this blessed night, I myself, the Steppenwolf, was radiant with this smile.