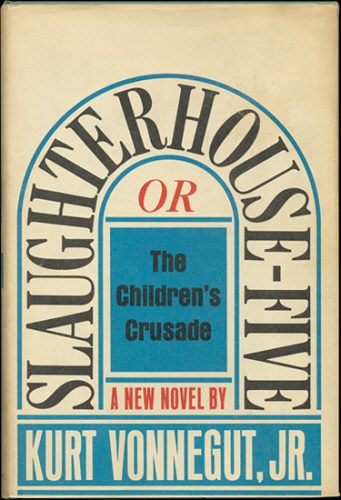 From there he travelled in time to 1965. He was forty-one years old, and he was visiting his decrepit mother at Pine Knoll, an old people’s home he had put her in only a month before. She had caught pneumonia, and wasn’t expected to live. She did live, though, for years after that.

Her voice was nearly gone, so, in order to hear her, Billy had to put his ear right next to her papery lips. She evidently had something very important to say.

‘How…?’ she began, and she stopped. She was too tired. She hoped that she wouldn’t have to say the rest of the sentence, that Billy would finish it for her.

But Billy had no idea what was on her mind. ‘How what, Mother?’ he prompted.

She swallowed hard, shed some tears. Then she gathered energy from all over her ruined body, even from her toes and fingertips. At last she had accumulated enough to whisper this complete sentence: