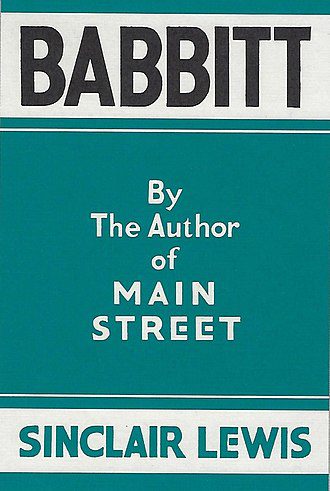 His name was George F. Babbitt. He was forty-six years old now, in April, 1920, and he made nothing in particular, neither butter nor shoes nor poetry but he was nimble in the calling of selling houses for more than people could afford to pay.

His large head was pink, his brown hair thin and dry. His face was babyish in slumber, despite his wrinkles and the red spectacle-dents on the slopes of his nose. He was not fat but he was exceedingly well fed; his cheeks were pads, and the unroughened hand which lay helpless on upon the khaki-colored blanket was slightly puffy. He seemed prosperous, extremely married and unromantic; and altogether unromantic appeared his sleeping-porch, which looked on one sizable elm, two respectable grass-plots, a cement driveway, and a corrugated iron garage. Yet Babbitt was again dreaming of the fairy child, a dream more romantic than scarlet pagodas by a silver sea.

For years the fairy child had come to him. Where others saw but George Babbitt, she discerned gallant youth. She waited for him, in the darkness beyond mysterious groves. When at last he could slip away from the crowded house he darted to her. His wife, his clamoring friends, sought to follow, but he escaped, the girl fleet beside him, and they crouched together on the shadowy hillside. She was so slim, so white, so eager! She cried that he was gay and valiant, that she would wait for him, that they would sail –

Rumble and bang of the milk-truck.