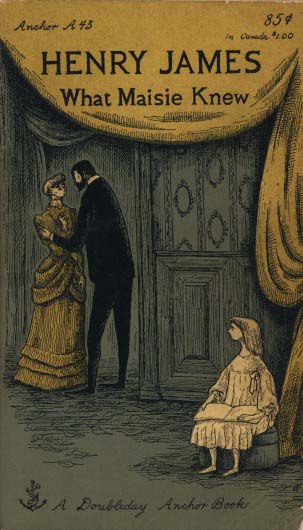 They still went to the Gardens, but there was a difference even there; she was impelled perpetually to look at the legs of other children and ask her nurse if they were toothpicks. Moddle was terribly truthful; she always said: ‘Oh my dear, you’ll not find another pair as your own.’ It seemed to have to do with something else that Moddle often said: ‘You feel the strain – that’s where it is; and you’ll feel it still worse, you know.’

Thus from the first Maisie not only felt it, but she knew she felt it. A part of it was the consequence of her father’s telling her he felt it too, and telling Moddle, in her presence, that she must make a point of driving that home. She was familiar, at the age of six, with the fact that everything had been changed on her account, everything ordered to enable him to give himself up to her. She was to remember always the words in which Moddle impressed upon her that he did so give himself: ‘Your papa wishes you never to forget, you know, that he has been awfully put about.’ If the skin on Moddle’s face had to Maisie the air of being unduly, almost painfully, stretched, it never presented that appearance so much as when she uttered, as she often had occasion to utter, such words. The child wondered if they didn’t make it hurt more than usual; but it was only after some time that she was able to attach to the picture of her father’s sufferings, and more particularly to her nurse’s manner about them, the meaning for which these things had waited. By the time she had grown sharper, as the gentlemen who had criticized her calves used to say, she found in her mind a collection of images and echoes to which meanings were attachable – images and echoes kept for her in the childish dusk, the dim closet, the high drawers, like games she wasn’t yet big enough to play.