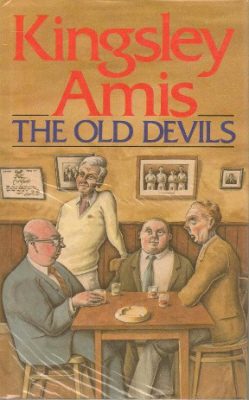 In the bedroom Gwen was at her dressing-table putting foundation on her face. Malcolm came round the door in his silent, looming way and caught sight of her in the glass. Something about the angle or the light made him look at her more closely than usual. She had always been a soft, rounded, fluffy sort of creature, not ineffectual but yielding in her appearance and movements. That had not changed; at sixty-one – his age too – her cheeks and jaws held their shape and the skin under her eyes was remarkably supple. But now those deep-set eyes of hers had an expression he thought he had not noticed before, intent, almost hard, and her mouth likewise was firmly set as she smoothed the sides of her nose. Probably just the concentration – in a second she saw him and relaxed, a comfortable young-elderly woman with gently tinted light-brown hair and wearing a blue-and-white check trouser suit you might have expected on someone slightly more juvenile, but not at all ridiculous on her.