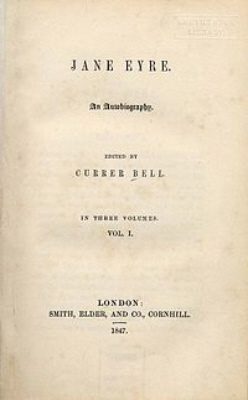 ‘Who could want me?’ I asked inwardly, as with both hands I turned the stiff door-handle which, for a second or two, resisted my efforts. ‘What should I see besides Aunt Reed in the apartment? – a man or a woman?’ The handle turned, the door unclosed, and passing through, and curtseying low, I looked up at – a black pillar! – such, at least, appeared to me, at first sight, the straight, narrow, sable-clad shape standing erect on the rug; the grim face at the top was like a carved mask, placed above the shaft by way of capital.

Mrs Reed occupied her usual seat by the fireside; she made a signal for me to approach; I did so, and she introduced me to the stony stranger with the words –

‘This is the little girl respecting whom I applied to you.’

He – for it was a man – turned his head slowly towards where I stood, and having examined me with the two inquisitive-looking gray eyes which twinkled under a pair of bushy brows, said solemnly, and in a bass voice –

‘Her size is small; what is her age?’

‘So much?’ was the doubtful answer; and he prolonged his scrutiny for some minutes. Presently he address me –

In uttering these words I looked up; he seemed to me a tall gentleman, but then I was very little; his features were large, and they and all the lines of his frame were equally harsh and prim.

‘Well, Jane Eyre, and are you a good child?’