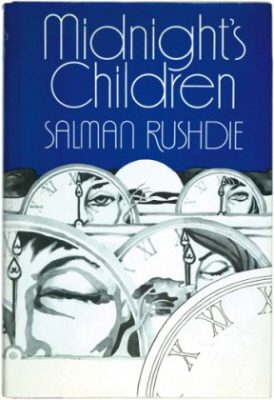 (… And now I am cast as a ghost. I am nine years old and the whole family, my father, my mother, the Brass Monkey and myself, we are staying at my grandparents’ house in Agra, and the grandchildren – myself among them – are staging the customary New Year’s play; and I have been cast as a ghost. Accordingly – and surreptitiously so as to preserve the secrets of the forthcoming theatricals – I am ransacking the house for a special disguise. My grandfather is out and about on his rounds. I am in his room. And here on top of this cupboard is an old trunk, covered in dust and spiders, but unlocked. And here, inside it, is the answer to my prayers. Not just a sheet, but one with a hole already cut in it! Here it is, inside this leather bag inside this trunk, right beneath an old stethoscope and tube of mildewed Vick’s Inhaler… the sheet’s appearance in our show was nothing less than a sensation. My grandfather took one look at it and rose roaring to his feet. He strode up on stage and unghosted me right in front of everyone. My grandmother’s lips were so tightly pursed they seemed to disappear. Between them, the one booming at me in the voice of a forgotten boatman, the other conveying her fury through vanished lips, they reduced the awesome ghost to a weeping wreck. I fled, took to my heels and ran into the little cornfield, not knowing what had happened. I sat there – perhaps on the very spot on which Nadir Khan had sat! – for several hours, swearing over and over again that would never again open a forbidden trunk, and feeling vaguely resentful that it had not been locked in the first place. But I knew, from their rage, that the sheet was somehow very important indeed.)