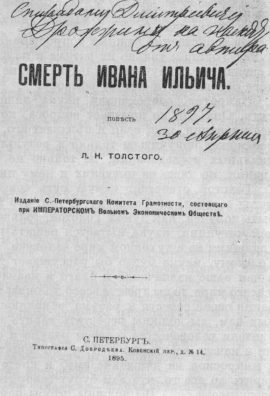 It was at this very same moment that Ivan Ilyich had fallen through the hole and caught sight of the light, and it was revealed to him that his life had not been what it ought to have been but that it was still possible to put it right. He asked himself: ‘But what is the right thing?’ and grew still, listening. Then he felt that someone was kissing his hand. He opened his eyes and looked at his son. He felt sorry for him. His wife came up to him. He looked at her. She was gazing at him with open mouth, the tears wet on her nose and cheeks, and an expression of despair on her face. He felt sorry for her.

‘Yes, I am a misery to them,’ he thought. They are sorry but it will be better for them when I die.’ He wanted to say this but had not strength to speak. ‘Besides, why speak, I must act,’ he thought. With a look he indicated his son to his wife and said:

‘Take him away … sorry for him … sorry for you too …’ He tried to add ‘Forgive me’ but said ‘Forego’ and, too weak to correct himself, waved his hand, knowing that whoever was concerned would understand.

And all at once it became clear to him that what had been oppressing him and would not go away was suddenly dropping away on one side, on two sides, on ten sides, on all sides. He felt full of pity for them, he must do something to make it less painful for them: release them and release himself from this suffering. ‘How right and how simple,’ he thought. ‘And the pain?’ he asked himself. ‘What has become of it? Where are you, pain?’

He began to watch for it.

In place of death there was light.

‘So that’s what it is!’ he suddenly exclaimed aloud. ‘What joy!’

To him all this happened in a single instant, and the meaning of that instant suffered no change thereafter. For those present his agony lasted another two hours. There was a rattle in his throat, a twitching of his wasted body. Then the gasping and the rattle came at longer and longer intervals.

‘It is all over!’ said someone near him.

He caught the words and repeated them in his soul. ‘Death is over,’ he said to himself. ‘It is no more.’

He drew in a breath, stopped in the midst of a sigh, stretched out and died.