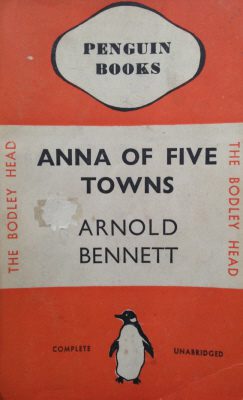 She stood there in her print dress and white apron, full in the eye of the sun, waiting for him. She could not guess what she had been summoned for. As a rule, she  never saw her father between breakfast and dinner. At length he turned.

“Anna,” he said in his harsh, abrupt tones, and then stopped for a moment before continuing. His thick, short fingers held the list which he had previously been consulting. She waited in bewilderment. “It’s your birthday, ye told me. I hadna’ forgotten. Ye’re of age to-day, and there’s summat for ye. Your mother had a fortune of her own, and under your grandfeyther’s will it comes to you when you’re twenty-one. I’m th’ trustee. Your mother had eighteen thousand pounds i’ Government stock.” He laid a slight sneering emphasis on the last two words. “That

was near twenty-five year ago. I’ve nigh on trebled it for ye, what wi’ good investments and interest accumulating. Thou’rt worth ” here he changed to the second personal singular, a habit with him ” thou’rt worth this day as near fifty thousand as makes no matter, Anna. And that’s a tidy bit.”

She tried to speak calmly. “Do you mean it’s mine, father?”

“It’s thine, under thy grandfeyther’s will haven’t I told thee? I’m bound by law for to give it to thee this day, and thou mun give me a receipt in due form for the securities. Here they are, and here’s the list. Tak’ the list, Anna, and read it to me while I check off.”

She mechanically took the blue paper and read :

“They paid ten per cent, last year,” he said, ” and with coal up as it is they’ll pay fiftane this. Let’s see what thy arithmetic is worth, lass. How much is fiftane per cent, on five thousand pun? ”

“Seven hundred and fifty pounds,” she said, getting the correct answer by a superhuman effort worthy of that occasion.