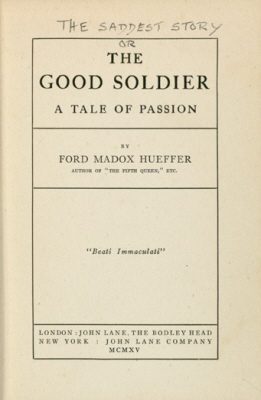 It happened that the Ashburnhams had never seen any of the Powys girls, though whenever the four parents met in London, Edward Ashburnham was always of the party. He was at that time twenty-two and, I believe, almost in pure in mind as Leonora herself. It is odd how a boy can have his virgin intelligence untouched in this world.

That was partly due to the careful handling of his mother, partly due to the fact that the house to which he went at Winchester had a particularly pure tone and partly to Edward’s own peculiar aversion from anything like coarse language or gross stories. At Sandhurst he had just kept out of the way of that sort of thing. He was keen on soldiering, keen on mathematics, on land-surveying, on politics and, by a queer warp of his mind, on literature. Even when he was twenty-two he would pass hours reading one of Scott’s novels or the chronicles of Froissart.

Mrs Ashburnham considered that she was to be congratulated, and almost every week she wrote to Mrs Powys, dilating upon her satisfaction.

Then, one day, taking a walk down Bond Street with her son, after having been at Lord’s, she noticed Edward suddenly turn his head round to take a second look at a well-dressed girl who had passed them. She wrote about that, too, to Mrs Powys, and expressed some alarm. It had been, on Edward’s part, the merest reflex action. He was so very abstracted at that time owing to the pressure his crammer was putting on him that he certainly hadn’t known what he was doing.

Ford Maddox Ford  ·  The Good Soldier - A Tale of Passion