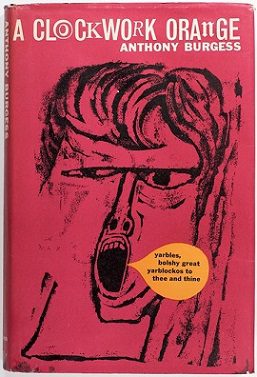 ‘We have a small flat,’ said Pete. ‘I am earning very small money at State Marine Insurance, but things will get better, that I know. And Georgina here – ‘

‘What again is that name?’ I said, rot still open like bezoomy. Pete’s wife (wife, brothers) like giggled again.

‘Georgina,’ said Pete. ‘Georgina works too. Typing, you know. We manage, we manage.’ I could not, my brothers, take my glazzies off him, really. He was like grown up now, with a grow-up goloss and all. ‘You must,’ said Pete, ‘come and see us sometime. You still,’ he said, ‘look very young, despite all your terrible experiences. Yes yes yes, we’ve read all about them. But, of course, you are very young still.’

‘Eighteen, eh?’ said Pete. ‘As old as that. Well well well. Now,’ he said, ‘we have to be going.’ And he gave this Georgina of his a like loving look and pressed one her rookers between his and she gave him one these looks back, O my brothers. ‘Yes,’ said Pete, turning back to me, ‘we’re off to a little party at Greg’s.’

‘Oh, of course,’ said Pete, ‘you wouldn’t know Greg, would you? Greg is after your time. While you were away Greg came into the picture. He runs little parties, you know. Mostly wine-cup and word-games. But very nice, very pleasant, you know. Harmless, if you see what I mean.’

‘Yes,’ I said. ‘Harmless. Yes, yes, I viddy that real horrorshow.’ And this Georgina devotcha giggled again at my slovos. And then these two ittied off to their vonny word-games at this Greg’s, whoever he was. I was left all on my oddy knocky with my milky chai, which was getting cold now, like thinking and wondering. Perhaps that was it, I kept thinking. Perhaps I was getting too old for the sort of jeezny I had been leading, brothers. I was eighteen now, just gone. Eighteen was not a young age. At eighteen old Wolfgang Amadeus had written concertos and symphonies and operas and oratorios and all that cal, no not cal, heavenly music. And there was old Felix M. with his Midsummer Night’s Dream Overture. And there were others. And there was like this French poet set by old Benjy Britt, who had done all his best poetry by the age of fifteen, O my brothers. Arthur was his first name. Eighteen was not that young an age, then. But what was I going to do?